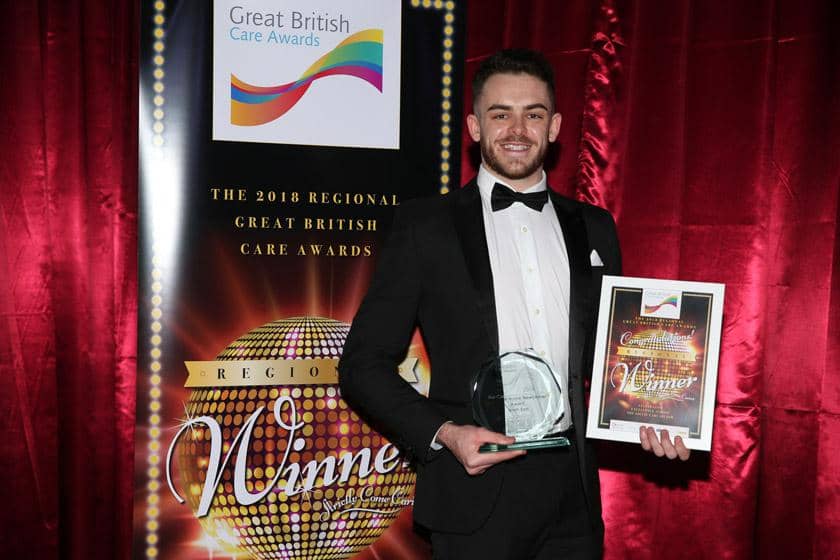 A true gent who brings activities to residents at a Sanctuary Care home in Coulby Newham has scooped a prestigious accolade in the North East Great British Care Awards.

Jack Brown, who has worked at Dalby Court Residential Care Home for 18 months, went head to head with finalists from across the region to win The Care Home Newcomer Award on Saturday (1 December).

Following the ceremony, which took place at The Hilton Hotel in Gateshead, Jack said: “It was an absolutely brilliant night and I was really surprised to win. When I first started working here I never would have expected anything like this would happen to me!

“One of our residents was so proud, I was nearly late for the ceremony because she was so determined to take my photograph as I was leaving!”

Now Jack will go through to the national finals of the Great British Care Awards at Birmingham’s ICC in March 2019, where he will compete with finalists from nine different regions for the title.

Dalby Court’s home manager Diane Maughan, who nominated Jack said: “Everyone at Sanctuary Care is so proud that he won. Jack is a wonderful person and gets genuine happiness from bringing joy to our residents – he is a true asset to our home and we are so happy for him.”

Jack’s nomination highlighted how he works tirelessly to ensure his residents, many of whom live with dementia, remain connected to the community outside the home and are able to continue to do things they have always loved to do. He was recognised as someone who goes above and beyond to bring the residents joy – including taking one resident who has a passion for boxing to matches in his spare time.