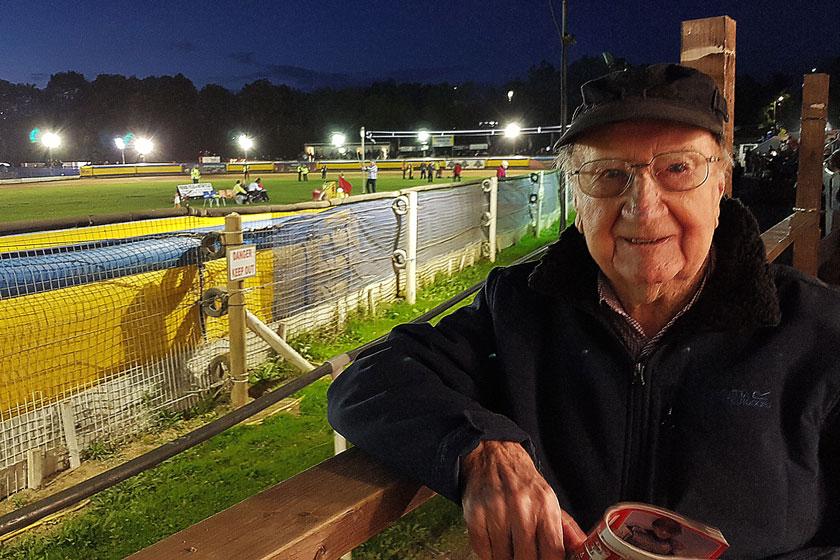 A Sanctuary Care resident in Ivybridge is one of the oldest surviving world speedway finalists and his life was celebrated for International Men’s Day with a very special trip.

88-year-old Jack Geran, who lives in Ivydene Residential and Nursing Home in Staniforth Drive enjoyed a visit down memory lane when he went to his local speedway track, where he used to race.

Settling for a ringside seat, Jack, in his heyday was a well-known speedway bike (a bike with no brakes and just one gear) rider and he became a world finalist in 1957 and 1958.

Jack said: “I loved the camaraderie between the riders the most.”

Jack was born in Melbourne, Australia in December 1929 and first arrived in the UK in 1952, where he joined the Exeter Speedway Team for four years and in that time he gained full international cap in 1953 and topped the National League averages in 1955.

After his four years at the Exeter Speedway Team, Jack found himself racing all over the country including Poole Pirates, Leicester Lions and Oxford Cheaters, before returning to Exeter in May 1965.

Coaching the next generation

And then when it was time the hang up the helmet to retire at the age of 38, Jack couldn’t turn his back on the sport and became a coach for Exeter Falcons’ junior team until the late 1970s.

Jack, who was also a husband and is a father to two added: “I was so proud to pass on my tips to all the new younger riders, it was really enjoyable.”

His personal highlights were representing Australia in the Individual Speedway World Championship and becoming a world finalist in 1957 and 1958, where he became 10th and 14th respectively.

The Sanctuary Care home’s activities leader Lucy Cassidy said: “Jack is a truly fascinating man. Everyone at Ivydene loves to hear his stories and they are genuinely so interesting. He is so proud and so he should be, he has achieved so much in his speedway racing career and it was a joy to take him back to the track. He enjoyed every minute and it’s an honour to celebrate his life for International Men’s Day.”

International Men’s Day (Monday 19 November) is an annual event that celebrates worldwide the positive value men bring to the world, their families and communities.